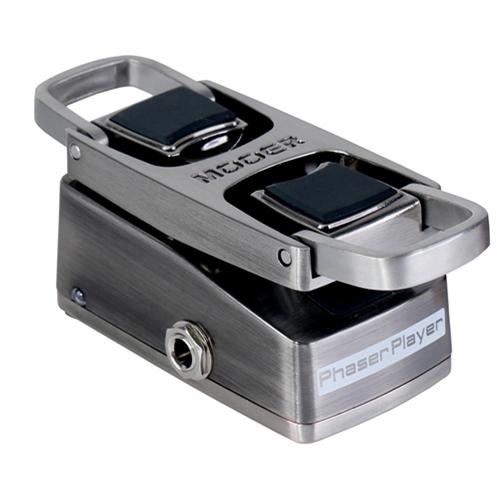 The Mooer Phaser Player is a really unique spin on the venerable phaser. Unlike any other phaser that we’ve used, the Mooer Phaser offers three selectable phaser sounds, and three modes of activation:

The phaser sounds great (in mode one, which is the conventional phaser mode), and it’s easy to get leslie-ish sounds by speeding up the phase rate with the wah-like footswitch. The momentary activation (and hybrid mode) is great for just adding a quick dose of effect on selected notes or a solo. It’s just the thing for a Pink Floyd or Jimi Hendrix vibe.

Surprisingly, the pedal is digital but you wouldn’t know it from the smooth sound and high headroom. We compared it to a Dunlop Phase 90, and while it sounded different (in terms of the filter shape) it held its own rather nicely.

Phaser mode two is quite different, in that it is a stepped sounding effect which is unlike the sound of a normal phaser. That said, it has more than a little bit of the “sample and hold” type sounds that synthesists will be familiar with. If that terminology doesn’t ring a bell, think of the intro to The Who song Who Are You? Of course, a true sample and hold effect is randomized so that the sequence doesn’t repeat, unlike mode two of the phaser. Still, it’s something different and definitely usable, especially at the slowest settings.

Phaser mode three is a manually swept phaser, meaning that you operate the pedal to control the sweep of the phase. It sounds kind of like a wah pedal, but reacts differently. Like mode two, it’s not something that you use every day but it’s always nice to have another option!

Switching between the modes is just a matter of holding the top footswitch down and power cycling the pedal. Easy enough!

About the only negative we could find is that the pedal can only operate via DC adapter, which isn’t surprising for the small form factor.

This pedal is built like a brick and offers creative options that just aren’t available elsewhere.