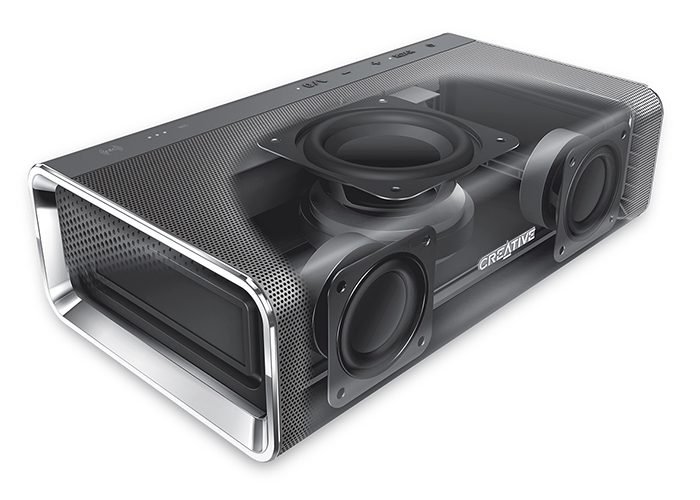 Forget what you may think you know about portable one-piece wireless speaker systems, the Creative Sound Blaster Roar represents a sea change in what will now be expected of products in its class. This is simultaneously due to what the Sound Blaster Roar is, and paradoxically, what it is not!

Before we wade too far in to the specifics, let’s take a quick look at the salient features of the device:

First of all, this is primarily a device that is designed to be used paired to wireless Bluetooth devices. In addition to the familiar standard coded Bluetooth connection schema, the Roar features a mode that allows it to pair to multiple devices, or even act as an open connection (one that any device can connect to without needing a password.) That said, wired operation (either analog through a 1/8” mini-jack, or USB tethered – in conjunction with a Windows or Macintosh computer) is certainly an option. Standalone operation is also possible through the use of the on-board micro-SD card slot. Two units can even be hardwired together to act as a dedicated “left” and “right” speaker with an optional cable.

One thing that separates this unit from most of the units in the marketplace today is that it shies away from the ubiquitous “boom tizz” (too much bass with an overly bright high frequency response) type of sonic voicing. This is a direct result of both the construction characteristics of the unit, and the goals of the design team.

A major design difference between the Roar and its competitors is that it features a total of five drivers (three active and two passive), where typical units feature just two. The two drivers on the side of the unit are passive (not electrically connected, though acoustically connected), the two drivers in the front handle the mid/highs, and the driver on the top handles the low frequencies. This increased radiating surface is one of the major reasons behind the Roar’s spacious sound-staging and impressive clarity.

The mid/high and the low frequency drivers are powered by separate amplifiers. This has multiple benefits, including preserving sound-staging (preventing a low frequency transient in one channel from collapsing the soundstage when the amplifier runs out of power) and allowing amplifier and speaker characteristics to best suited to their intended task.

Another (obvious) physical difference between this unit and most all of its competition lies in its form factor. The Roar is oriented like a hardcover book laying flat…rather than the “on-edge shoebox” design of similar sized devices (think Jambox or Bose Soundlink). Creative contends that this design makes for a more stable physical and sonic presentation. They compare it to the boxer type engine that Subaru uses for its cars, and BMW for its motorcycles.

Now that we’ve covered the physical plant, so to speak, lets take a quick look (not easy!) at some of the additional features of the unit:

The amazing thing is that as long as that list is, it’s more than likely that I’ve neglected something about the unit!

That said, all of the above features would be 100% meaningless if the unit didn’t sound good! The truth is, that the unit sounds much much better than just good.

If you’ve read my reviews over the years, you’ll know that I’ve been in and out of recording studios during the past 30 years and have heard hundreds of speakers (as well as components of all kinds).

If you have an unlimited budget, it’s easy to make a device that will play at 120 dBA with a 0-100K bandwidth. Even with that unlimited budget, however, there are no guarantees that that the device you build will actually be musical!

Musicality is a funny thing, it can’t be summarized in a single technical specification, or even multiple specifications. Some very high dollar devices are not musical, and some budget devices are! Even more interesting is that there is no one topology that produces great sounding amplifiers, or speakers, or microphones for that matter. One could say that there are many ways to Nirvana…

So, what does all of that have to do with the Soundblaster Roar?

I’m not going out on a limb at all if I tell you that the Roar is the least expensive, truly musical device that I’ve heard in years…maybe ever.

Or you can put it in a place where you can really listen to it carefully, with the drivers on the face of the unit at close to ear level. When you listen to the Roar in that way (in the close field) you begin to appreciate just how good the unit is at putting across the music in a way that lets you really connect with the intentions of the artist and producer..

The first night that I had the Roar, I listened through a large variety of material, including classic rock, jazz, rap, pop, and many songs that I either produced or mixed. I noticed right away how the unit had almost no sonic signature. In other words it just sounded like the source material, rather than overlaying its own identity on each recording. A certain four letter word of a brand is notorious for this behavior. I’m sure you know the one I mean!

Truth be told, I’ve lost track of just how many true audiophile systems I’ve heard (and I’m talking about systems ranging from 25K to 400K) that were far less satisfying to listen to.

It’s important for you to understand that I’m not trying to tell you that the Roar can give the same level of impact in a 750 square foot listening room as a pair of Martin Logan electrostatics driven by a Pass Labs Class A amplifier. That would be patently impossible…but when listened to in the close field (also incorrectly known as the near field – which is a term describing a specific kind of speaker developed by engineer Edward M. Long) the Roar just seems to disappear and leave the music intact.

There is no higher compliment in my book.

Interestingly the Roar’s multi-surface driver arrangement also (when listened to in the close field) recalls the sonic signature of some of the venerable dipole speakers of the past, like the DCM Time Windows, Dahlquist DQ-10’s, and Apogee Stages, providing a deep and wide sound stage, all the while sounding quite dynamic.

Of course there are limitations to what any device can do, and the Roar has no dispensation from the laws of physics…you won’t be rattling anyone’s silver fillings with the bass response of a 15 Hz sine wave. Honestly, you couldn’t even reproduce a 15 Hz sine wave on the Roar! That’s okay.

Similarly, if you are the type that enjoys the boomy and inaccurate bass response that some brands augment the BEATS with, you might find the Roar a little bit lean for your tastes. The Roar aspires to honest timbral and dynamic response. That said, you can add a little bit of “fatness” by engaging the TeraBass function which essentially acts as the familiar loudness button on a stereo receiver. Happily, even at maximum volume, the TeraBass function never causes the Roar to sound strained or congested.

When I needed to get the maximum output out of the unit in a noisy area or needed a little bit of extra clarity or sparkle (or even maximum output volume from the Roar) the Roar Button came in handy. The Roar button function might also be useful for increasing the speech intelligibility on some video presentations and for books on tape. I tended to leave it off for critical listening sessions.

From a practical standpoint, the Roar appears to be very well made and has the most solid Bluetooth performance of any device I’ve used. Using a Samsung Galaxy 4S phone, I noted distances of more than 50 feet in a wood framed building of perfect no-dropout connection.

Speaking of phones, I got more than a few compliments on the sound of the speakerphone when paired with my Samsung. You’ll also be pleased to know that the battery performance is very very good.

Overall, I can (and do) recommend this unit without hesitation.

At it’s retail cost of $149.99 It simply crushes its immediate competition (and some competitors at double or triple the price).