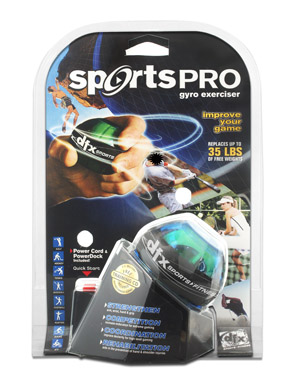 If there is one thing that is a certainty along with death and taxes, it’s that when you’re on the road (whether touring or covering trade shows) it’s easy to overeat and neglect your personal health. We all know some of the classic ways to keep in shape when on the Hampton Inn regimen…you know, things like taking the stairs instead of the elevator, and parking the car in the furthest most parking spot. Truth be told, those things are great, and you really should do them regularly but the truth is that they at best will serve to slow the progress of time and travel! At best, you can use the workout rooms and the pool, but when you are coming back at 2 AM from a gig or a meeting (or the bar) that’s not always practical.

What if I told you that you could have a great upper body workout from a device that was the approximate size of a tennis ball, which weighed less than a pound, and had more than a few beneficial side effects? Would you be interested in that? (By the way, that last section should be read in your best Sheldon “Machine” Levine voice – as in Glengarry Glen Ross) I thought you might be!

It’s kind of a funny story how I came to be acquainted with DFX Sports and their Powerball series of products. I was at CES 2012, and it was the very last day in the afternoon. At that point, those of us covering the show have seen all the big introductions (and 2012 was not a big year for big introductions at CES, btw) and already kept all our appointments with manufacturers. Now it’s time for a little bit of random “walking the show” to see what jewels are there for the uncovering. So, picture tired feet, and a tote bag full of all manner of product brochures and the occasional promotional t-shirt… Now picture a booth full of inflatable sports balls, magnetic bracelets, and a bunch of…uh..what the heck are those?

It was then that Tom Smith of DFX Sports/Fitness happened to spy my CES Press credentials. Like many savvy individuals found at trade shows, Tom correctly understood that engaging the reviewer is ALWAYS good policy. Even in my semi-coherent show induced daze, I was aware that there was something unusual happening at this booth. He kept his pitch short and sweet, “Here, you have to try this thing, check it out…” he held a tennis ball sized plastic globe in his hand and waved it back and forth a dozen times. Then he handed it to me.

And all hell broke loose!

How was it possible that something so small could be generating so much force? This thing literally felt like it was going to jump out of my hand, smack someone in the face, and head out to greater Las Vegas! It didn’t take too long for me to realize that this ball contained a gyroscope, and if I were a little more ambitious (and had done better in Physics class) I’d explain to you exactly how and why a gyroscope works as it does. But since I’m not (and I didn’t) that’s a private matter between you and Wikipedia.

The basic idea is that the gyroscopic function of the ball generates 30 or so pounds of torque, and this is the basis for the workout. For someone like me, who prefers free weights to machines (in general) the gyro really is a fusion that combines the best aspects of free weights, which would include balance and range of motion among other attributes with the best aspects of a machine based workout.

The most difficult part of using the gyro is starting it. There are three basic ways to do this: you can start it with your opposite hand thumb, you can use a small (included) cord to start it like a lawnmower engine, or you can purchase the gyro with a docking station that has an electric motor that will bring the device up to speed. Once it’s up to speed, you simply rock it left/right (or right/left) repeatedly until the inner ball starts to spin. You will feel the entire device become heavy, and then you’re ready to rock!

One of the very coolest things about the gyro is that the intensity of the workout is almost infinitely variable. Depending upon how fast the gyro is spinning (and this depends upon how quickly the left/right wrist motions are made) the workout can either be mellow or off the charts demanding. It’s up to you, and at any time if the muscles start burning a bit too much, you can just let the gyro spin down a bit.

All of this would be moot if the gyro didn’t produce results, right? As it turns out, the results I have personally achieved with the gyro within about two weeks of every other day usage are more than impressive. I can report that my hand and finger strength is much improved, and this manifests itself immediately whether I am playing guitar or drums. My forearms are much firmer and well defined, which isn’t surprising as I could plainly see the muscles flexing (and feel the burn) when using the gyro! By varying the arm position (and grip) it’s possible to work all the muscles of the arm, the pectorals, and the shoulder muscles as well.

According to information on the DFX Sports website, the gyro has been endorsed by medical professionals as a device with therapeutic value for those suffering from carpal tunnel and other repetitive stress injuries. I can certainly say that the workout has no damaging impact associated with it, and I have experienced zero joint pain as a result of using it. The only pain I experienced, is just the normal (and welcome) pain associated with gaining muscle mass!

Another benefit that I should mention, is that the gyro makes differences in strength and agility between your left and right arms/wrists/fingers readily apparent. As a drummer, I strive for symmetry between my left and right hands and feet…although I’m yet to be completely ambidextrous, I’m well on the way towards this goal. The gyro has helped me identify and begin to correct a difference in the flexibility of my left hand versus my right.

I highly recommend this device for anybody who is looking to simply stay in shape, or better yet increase their finger, wrist, and arm strength in a fun and effective way.

The DFX Sports Pro Gyro is addictive, ultra-portable, and the results speak for themselves!